A team of researchers from the University of St Andrews has achieved a breakthrough in the measurement of lasers which could revolutionise the future of fiber-optic communications.

The new research, published in Optics Letters (Wednesday 6 March), reveals the team of scientists has developed a low-cost and highly-sensitive device capable of measuring the wavelength of light with unprecedented accuracy.

The wavemeter development will boost optical and quantum sensing technology, enhancing the performance of next generation sensors and the information-carrying capacity of fiber-optic communications networks.

Led by Professor Kishan Dholakia from the School of Physics and Astronomy, the team passed laser light through a short length of optical fiber, the width of a human hair, which scrambles the light into a grainy pattern known as ‘speckle’.

This pattern is better known as the fuzzy ‘snow’ seen on faulty analog televisions (below). Normally scientists and engineers work hard to remove or minimise its effect. However, the shape of the speckle pattern changes with the wavelength (or colour) of the laser and can be recorded on a digital camera. 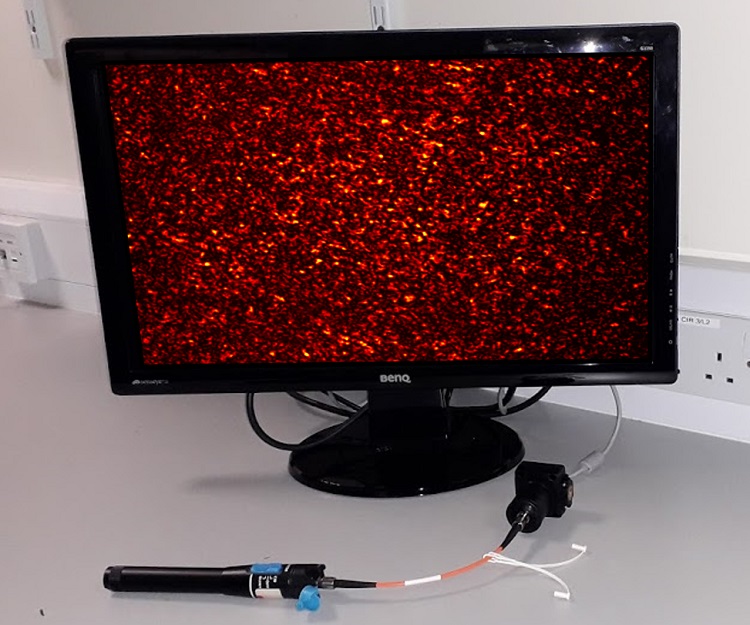 Light can be thought of as a wave. The repeat cycle of the wave, the wavelength, is crucial for all studies using light. The team used this approach to measure the wavelength at a precision of an attometer. This is around one thousandth of the size of an individual electron and 100 times more precise than previously demonstrated. For context, the measurement of such small changes in the laser wavelength is the equivalent to measuring the length of a football pitch with an accuracy equivalent to the size of one atom.

Wavemeters are used in many areas of science to identify the wavelength of light. All atoms and molecules absorb light at very precise laser wavelengths, so the ability to identify and manipulate wavelength at high resolution is important in diverse fields ranging from cooling of individual atoms to temperatures colder than the depths of outer space, to the identification of biological and chemical samples. The ability to distinguish between different wavelengths of light also allows more information to be sent through fiber-optic communications networks by encoding different data channels with different wavelengths.

Conventional wavemeters analyse changes in wavelength using delicate, high-precision optical components. The cheapest instruments used in most everyday research cost tens of thousands of pounds. In contrast, the St Andrews wavemeter consists of only a 20cm length of optical fiber and a camera. In future it may be made even smaller.

Dr Kishan Dholakia explained: “The principle of the wavemeter can be easily demonstrated at home. If you shine a laser pointer on a rough surface like a painted wall, or through a semi-transparent material like frosted sellotape, the laser gets scrambled into the grainy speckle pattern. If you move the laser, or change any of its properties, the exact pattern you see will change dramatically. It’s this sensitivity to change that makes speckle a good choice for measuring wavelength.”

Dr Graham Bruce, also from the School of Physics and Astronomy and lead author on the paper, said: “There is major investment both in the UK and around the world at present in the development of a new generation of optical and quantum technologies, which promise to revolutionise the way we measure the world around us, the ways we communicate and the way we secure our digital information. Lasers and the way we measure and control their properties are central to this development, and we believe that our approach to measuring wavelength will have an important role to play.”

In future, the team hopes to demonstrate the use of quantum technology applications in space and on Earth, as well as to measure light scattering for biomedical studies in a new, inexpensive way.

The paper Overcoming the speckle correlation limit to achieve a fiber wavemeter with attometer resolution is published in Optics Letters and is available online.

Please ensure that the paper’s DOI (https://doi.org/10.1364/OL.44.001367) is included in all online stories and social media posts and that Optics Letters is credited as the source.