A letter written by a suffragette that kick-started higher education for women in the UK has been discovered by historians.

The 140 year old document, which pleads with the University of St Andrews to allow women to study medicine, was found in the University’s archives.

Written by Sophia Jex-Blake, who went on to become one of the UK’s first registered woman doctors, the letter gave impetus to the foundation of the first degree level certificate for women in the UK, at St Andrews.

The find was made by 5th year part-time history student Lis Smith. Lis, who is completing her PhD at the University’s Institute of Scottish Historical Research, said, “We knew that Sophia Jex-Blake and her supporters, in their quest to open up University medical education for women, had written to the Senatus Academicus at St Andrews in an attempt to gain admittance to classes there, but we didn’t know documentary evidence existed.

“While searching the archives for information about the University’s higher certificate for women, I was astounded to come across what must be the very letter Jex-Blake wrote.”

Born in Hastings in 1840, Jex-Blake campaigned tirelessly for the admittance of female students, including herself, to British universities before Higher Education was widely available to women. In 1869, she argued in her essay ‘Medicine as a profession for women’ that women doctors were required for ‘those of their own sex who need them’.

Jex-Blake, who died 100 years ago this year, wrote to St Andrews in 1873 after an unsuccessful attempt to graduate from the University of Edinburgh.

The recently-uncovered letter said that ‘at least fifteen ladies would at once avail themselves of the permission, if given, to matriculate at the University of St Andrews’.

The women even offered to hire or build suitable premises for a medical school and to arrange for lectures to be delivered in the subjects not already covered in the curriculum at St Andrews.

Sophia’s letter, although unsuccessful at the time, eventually prompted the establishment of the LLA (Ladies Literate in Arts) at St Andrews, an innovative distance-learning diploma for women. The qualification, which ran from 1877 until the 1930s, gave women access to University education in the days before they were admitted as students.

Many thousands of women around the world participated in the LLA scheme, and it was so popular that it survived long after women were admitted as full students to St Andrews in 1892.

Undeterred, Jex-Blake went on to help establish the London School of Medicine for Women in 1874, and was accepted by the University of Berne, where she was awarded an MD in January 1877. Four months later, following further qualifications gained in Dublin, she registered with the General Medical Council as the third woman doctor in the country.

Eventually, she moved back to Edinburgh and opened her own practice, which became the Bruntsfield Hospital for Women. She died on 7 January 1912.

Lis continued, “Most of the signatories of 1873 letter did eventually succeed in practising as doctors by qualifying outwith the United Kingdom and Jex-Blake herself went on to resolve her difficulties by setting up the Edinburgh School of Medicine for Women in 1886. Clearly, too, she did not bear a grudge because in 1893 she wrote to propose an affiliation between her School of Medicine and St Andrews. Unfortunately this document appears to be missing, but I am hopeful that further research will unearth it.” 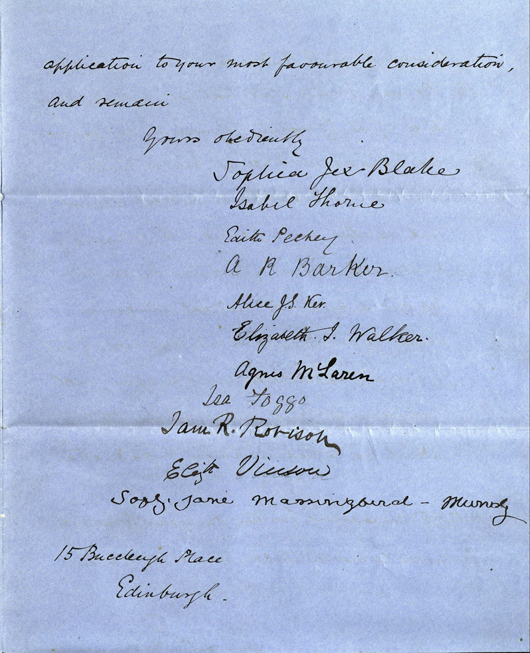 Images are available from the Press Office – contacts below