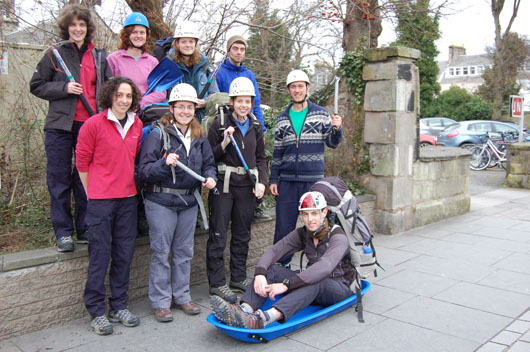 A century after Captain Scott and his team perished on their polar expedition, the great explorer’s spirit of adventure is inspiring a team of students from the University of St Andrews to set off on an adventure of their own – aiming to cross the 20-mile Lairig Ghru pass in the Cairngorms.

This is not the first time the spirit of Scott has been found in St Andrews.  It first travelled from the South Pole to North Fife carried in JM Barrie’s pocket when he came to deliver his famous rectorial address on ‘Courage’ at the University of St Andrews on 3 May 1922.

Ten years earlier, on 29 March 1912, Captain Scott, awaiting death by starvation and exposure in a tent in the Antarctic, wrote to Sir James M Barrie. In that final letter he asked Barrie to take care of his wife Kathleen and son Peter. Barrie was so proud of the letter that he carried it around for the rest of his life.

Addressed to “My Dear Barrie”, the moving message shows a man who was stoic until the last:

“We are showing that Englishmen can still die with a bold spirit fighting it out to the end… We have done everything possible, even to sacrificing ourselves in order to save sick companions. I think this makes an example for Englishmen of the future.”

Barrie was determined to share Scott’s heroic attitude with the students of the University of St Andrews, and in the full flow of his historic speech pulled the letter out from his pocket and revealed:

“I should like to read you some passages of a letter from a man of another calling, which I think will hearten you. I have the little filmy sheets here.”

And so he read from the letter, written by his close friend with only the faintest hope that it would ever be delivered:

“I am not at all afraid of the end, but sad to miss many a simple pleasure which I had planned for the future in our long marches. . . . We are in a desperate state–feet frozen, etc., no fuel, and a long way from food, but it would do your heart good to be in our tent, to hear our songs and our cheery conversation. . . . Later–(it is here that the words become difficult)–We are very near the end. . . . We did intend to finish ourselves when things proved like this, but we have decided to die naturally without.”

Barrie went on to reflect:

“How comely a thing is affliction borne cheerfully, which is not beyond the reach of the humblest of us. What is beauty? It is these hard-bitten men singing courage to you from their tent; it is the waves of their island home crooning of their deeds to you who are to follow them.”

So as the Expand team prepare to follow in those pioneering footsteps, the Courage of Scott and Barrie goes with them.

Professor Lorna Milne, Proctor of the University, said “I wish all the luck to our adventurous students raising money for a wonderful cause. I encourage the St Andrews community to support this generous team.”

For details of the Scott Centenary Sledge Pull go to: www.sss100.org/other-pulls-and-plans.html

Edward Morgan, Vice-President of ExpAnd and Team Leader, is available on 07867612215